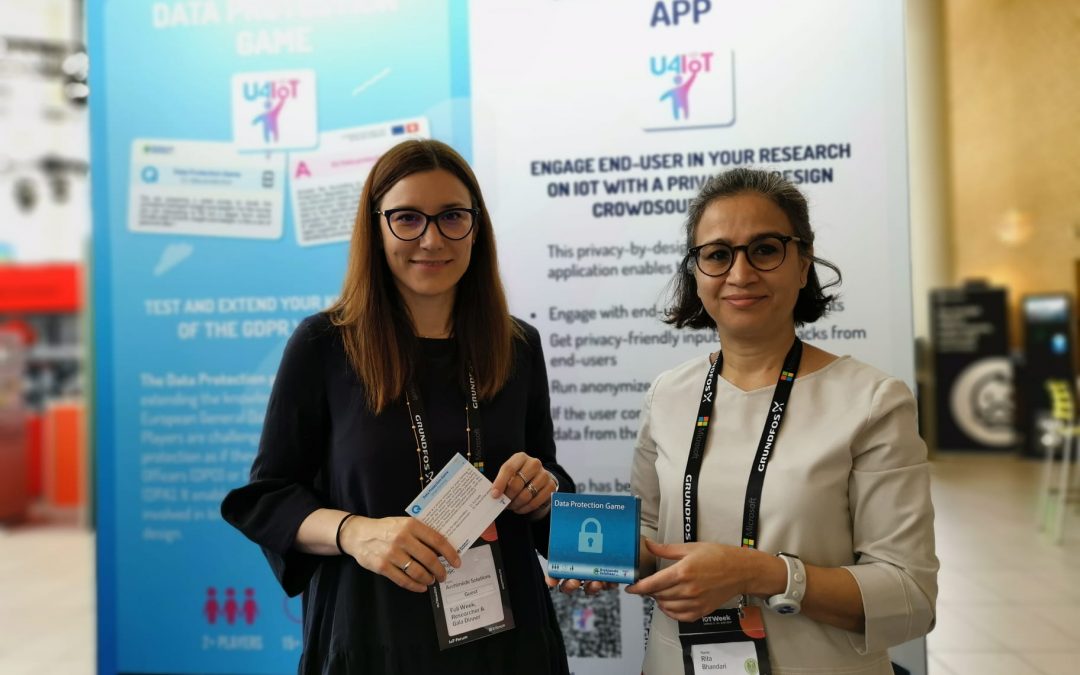 As a central hub for the IoT Ecosystem, the LSPs booth at the IoT Week in Aarhus has successfully attracted many visitors from different domains thanks to its comprehensive and complementary transversal activities. Support tools to the large array of IoT applications were showcased, demonstrating a collaborative spirit among the European IoT Large-Scale Pilots.

Notably, the collaboration between the Coordination and Support Actions was a highlight, as CREATE-IoT, U4IoT and NGIoT shared a common thematic space on Privacy and Security through which a series of joint activities and tools, developed for and thanks to the LSPs inputs and feedbacks, were showcased.

For instance, the possibility to connect the public to experts in different domains was offered by CREATE-IoT through the “Meet IoT experts” format, which allowed attendees with any particular question to benefit from our large network of experts in IoT.

The interest of visitors was also raised towards our White Paper on IoT Large-Scale Pilots and Data Protection – Lessons learned and recommendations for GDPR Implementation in IoT Deployments. Attendees were invited to subscribe to our newsletter by sending an email to https://list.genevaproxy.com/listinfo/gdprwnews to receive updates on the White Paper and news about data protection.

The Serious Game on Data Protection developed in the framework of U4IoT was presented to the public as a fun way for players to better understand the European General Data Protection Regulation (GDPR) in various contexts.

LSPs contributed to this thematic initiative by providing their inputs as regards the privacy issues they faced and achievements when implementing their IoT deployments.

The public expo attracted an enthusiastic general public from all ages. Young students had the chance to familiarize with IoT technologies, their different applications and arising issues.

Embracing topics from international cooperation, to future manufacturing and industry, smart living & e-health, smart cities and communities, AI and smart data, and 5G, among others, were presented in interactive ways.

At the Public Expo, U4IoT demonstrated end-user engagement practices. During each demo, one of the U4IoT tools and support services has been showcased. LSP projects and the general public participated in the demos by making use of the Crowdsourcing Tool, Privacy Game, Co-Creation Workshop Toolkit and End-User Engagement Toolkit.

The security and privacy topic was also emphasized in the sessions with a track on its own, covering different domains of application. For instance, the Security and Privacy Compliance with GDPR in IoT for Smart Living Environments (SLE) for Healthy Ageing  track, in which specific requirements for data and privacy protection in such environments were analysed in light of GDPR compliance.

The session on IoT Privacy by Design at the Time of GDPR, moderated by Sebastien Ziegler from Mandat International, and the joint workshop on  Privacy by Design Smart Cities & Communities, with Mandat International as co-organiser, aimed at tackling urban challenges where IoT has solutions for smart cities for secure data collection and analysis and focused on the convergence towards an ecosystem of interoperable resources.

This third edition of the workshop on Privacy by Design continued exploring solutions for the convergence towards an ecosystem of interoperable resources and seeking ways to increase communities cooperation to leverage on IoT technologies and UN Sustainable Development Goals. The track on Smart Cities and Communities was significantly supported by SYNCHRONICITY, which gathered many experts and partnered with many organisations to deliver 10 sessions about the latest developments in the smart city domain, providing a forum to foster cooperation and convergence on IoT solutions.

In collaboration with CREATE-IoT, U4IoT has participated in a workshop focused on Trust in Invisible Agents organised by FutureEverything, which explored creative and artistic methods to engage with issues of trust, transparency and bias in algorithmic and data systems in the IoT. U4IoT presented IoT adoption barriers and recommendations for LSPs, while other IoT experts focused on how these barriers should be tackled.

The special focus on Privacy and Security was appreciated and welcomed by all participants, resulting from a demand noted in previous IoT Week editions and from GDPR implementation in European Projects currently gaining momentum.